All eyes have been on bitcoin recently as markets move into a consolidation phase following a flash crash last Thursday. What may have gone unnoticed is the issuance of more USDT as Tether market capitalization continues to crank higher. $100...

Tether’s market capitalization has been slowly increasing. Since Friday a further $100 million has been added to it taking the total now to $3.6 billion. The movements have not gone unnoticed by some industry observers.

Yesterday there were 36 million ETH Tethers in the Treasury. Today 19 million.

At this rate expect an ETH Tether print or a large-scale transfer of OMNI Tethers to ETH in the next 1-3 days. pic.twitter.com/weBTkqtgfa

During bitcoin’s 2019 peak on Thursday, Tether volume reached an all-time high of over $40 billion. It is still the largest stablecoin on the market by a massive margin, second is Circle’s USDC with a market cap of $366 million, ten percent of Tether’s. Since April this year, the supply of Tether has increased 80 percent and has been cranking slowly higher.

It's common knowledge now that whenever more Tether enters the market, Bitcoin’s price usually spikes a short while afterward. A 66-page thesis released last year by a Finance Professor from the University of Texas Austin provided evidence on this correlation and made claims that the 2017 crypto boom was orchestrated using newly printed Tether.

This new influx of 55 Million USDT has coincidentally arrived just in time to prop up Bitcoin’s falling price, as the asset continues to correct from its new YTD-high at $13,850. 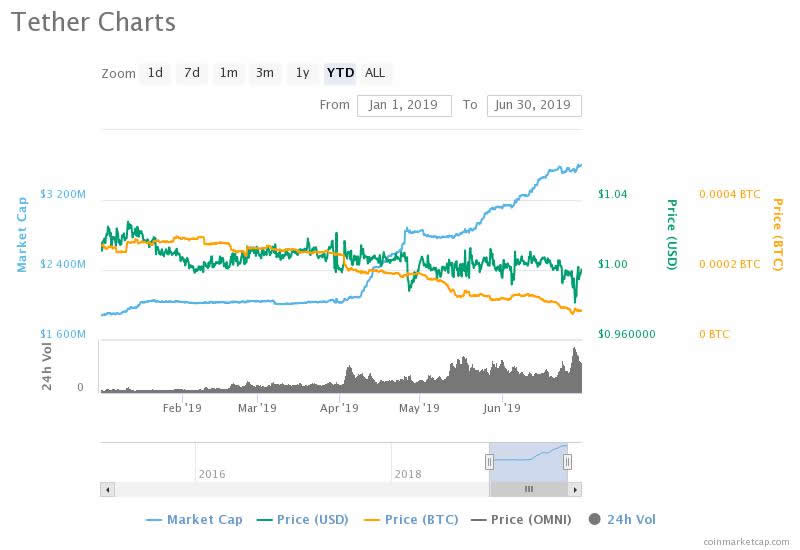 A recent Medium titled ‘Welcome to Bitfinex’s Second Tether Bubble’ has observed the premiums on different exchanges using stablecoins and USD. These have fluctuated this year quite significantly, especially on Bitfinex, the birthplace of Tether.

In late April the New York Attorney General office alleged that Bitfinex lost $850 million and subsequently used funds from the very closely affiliated Tether operator company to covertly cover the shortfall. In May a positive ruling was issued in Bitfinex’s favor.

Between April 24 and May 16 a private token sale took place for Bitfinex’s version of Binance Coin, UNUS SED LEO, offering 1 billion USDT worth of LEO in exchange for BTC, USD, and USDT. LEO is currently the thirteenth largest crypto asset with a market cap of $1.9 billion.

Since April USDT supply has increased by 1.6 billion tokens but it was no longer through bitcoin’s OMNI layer. According to the post the new tokens have mostly been issued on Ethereum, and Tether have recently created a small supply of USDT tokens on EOS and TRON.

PREMIUMS AND LEVERAGING ON BITFINEX

The increase in USDT has been accompanied by a massive surge in bitcoin prices across all exchanges with Bitfinex having one of the highest premiums during this period of NYAG investigation. Bitfinex also offers a 3.3x leveraging on many pairs including those with USDT, USD, and BTC which potentially amplifies the price impact of increasing demand.
Additionally, an unknown amount of USDT was used in the LEO private sale, all of which went to Bitfinex enabling token issuance to be suspended during the investigation. The report adds that the exchange may have been seeking ways to take Tether out of circulation during the period but following May’s verdict the USDT printers were fired up once again.

Can Tether be trusted as a true dollar pegged asset? Add your comments below.

Enjoy an anonymous cryptocurrency betting & casino in one place with 20+ cryptos available and get a generous Welcome Package up to 7 BTC now! Use a promocode CSL1X and grab a 125% bonus for the 1st deposit!

Facebook Libra is not coming to India amid Regulatory Issues

Canadian Police Asked to Exhume the Body of Quadriga CX’s...

Mark Cuban: BTC’s Biggest Issue Is That People Don’t Use...

Nic Carter: The Future Is Crypto, Not Blockchain